This ongoing research project started in October 2001 to develop a corrosivity classification of the underground environment which will be used as an aid for reinforcement selection.

When mining at great depth, on going time-dependent deformations or unexpected rock failures due to high stress may be experienced. In order for ground support to survive the large displacements and control the rock mass, yielding cable bolts have been developed in South Africa and Australia. Decoupling of a significant length of the strand from the cement grout to allow for large displacement of the reinforcement element means the system is effectively a point anchored system. Consequently, for cable bolts the performance of the barrel and wedge anchor becomes critical to achieve effective load transfer. Failure by sliding of anchors relative to the strand under low loads has been observed in several underground mines in the Eastern Goldfields of Western Australia. This is attributed to a combination of poor installation practices and corrosion. The results from a number of cable bolt barrel and wedge combinations placed within a corrosion chamber and subsequently pull tested to determine the load-displacement response are examined. The results show that after 7 months in the corrosion chamber the barrel and wedge used with a yielding cable bolt failed at loads significantly less than the strand capacity. The service life can be extended to more than 10 months with the application of barrier corrosion protection. On the other hand, galvanising of barrel and wedge anchors is not recommended.

The effects of corrosion upon the load bearing capacity and ultimate tensile strength of galvanised friction bolts were determined. Corrosion rates were measured by overcoring of the reinforcement elements in situ. Overcoring was achieved at several sites using a specifically designed overcoring drill rig. This rig has the capacity to drill up to 3.0m (140mm diameter core) in any orientation and up to a height of 7.0m. The recovered core and friction bolt elements were pull tested in the rock mechanics laboratory at the WA School of Mines (WASM) in order to determine their load displacement characteristics for various embedment lengths. The friction bolt elements were then analysed for rates of corrosion and determination of the ultimate tensile strength. Relationships were formed between this data and the environmental conditions the friction bolts were exposed to, in order to determine the major factors affecting the corrosion process and how they affect bolt performance.

A series of images showing corrosion in mining. 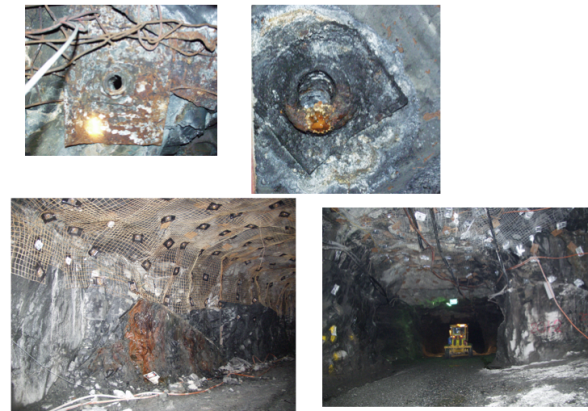 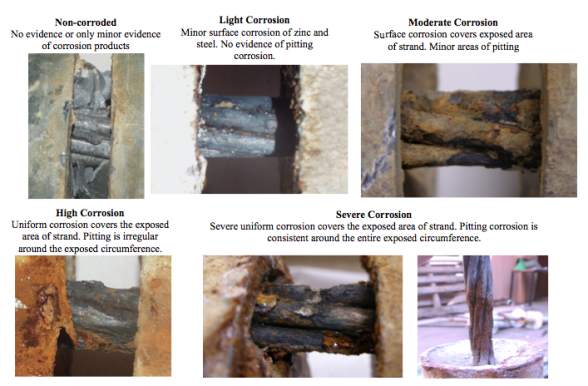 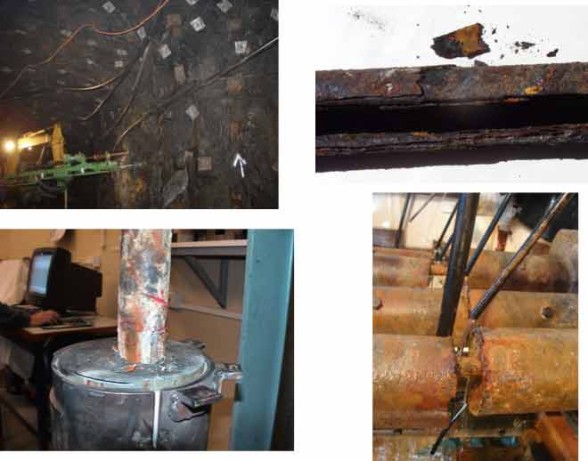 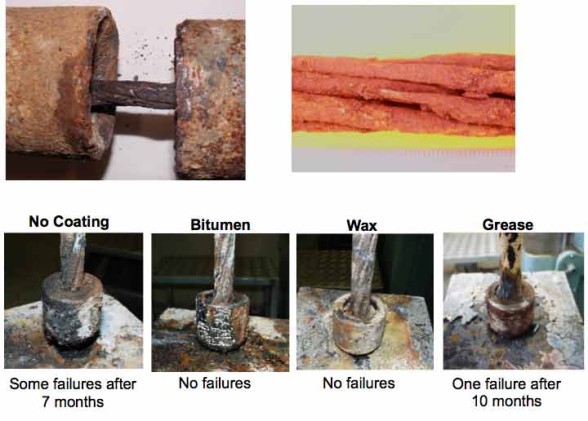